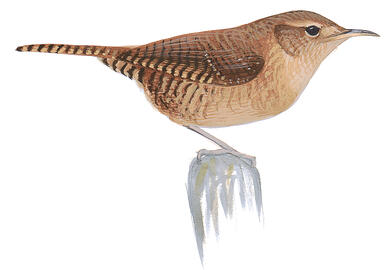 The first clue that a house wren is nearby might be its melodious song or its harsh, scolding call. This perky, sparrow-sized songbird is often seen with its tail held upright while darting about in brush close to the ground. Brown on its upper parts, lighter underneath, the house wren has dark and light barred markings on its tail, wings and sides. It has a thin, slightly curved bill and flattened head designed for reaching insects and spiders found in bark, twigs and foliage. Males and females look the same.

Its habitat includes open woodlands and forest edges, as well as residential areas. Birds seen in our area migrate from Mexico and the southern U.S. in early May. They begin their return migration in September at the end of their breeding season.

Unable to create their own cavities for nesting, House Wrens depend on existing ones. The male builds multiple, simple nests of twigs and grass. He may use a crevice in a building, nest box, or tree opening, sometimes taking over the nests of other cavity nesters. After the male attracts a mate with his complicated songs, the female chooses and completes one of the nests by adding a soft cup made of plant fibers, animal hair, feathers and sometimes spider egg sacs. When the spiders hatch, they help control mites and other nest parasites.

The current conservation status of house wrens appears to be stable. Their range includes much of the western hemisphere.

Bird of the Week is brought to you by Audubon Rockies and Weminuche Audubon Society.