Great Salt Lake has tremendous importance as habitat for shorebirds. Forty-two species of shorebirds have been confirmed there. On May 21, 2021, Utah Governor Cox declared 2021 as the “Year of the Shorebird” in Utah. In celebration of Year of the Shorebird, each month for the rest of the year, longtime shorebird enthusiasts Ella Sorensen and Max Malmquist are highlighting some of the lesser-known shorebird species that typically do not receive as much attention as the boldly patterned American Avocets and Black-necked Stilts.

A visual hunter on a quest for brine flies, the plover stops, scans, sees, then pursues with black legs blurring in brisk locomotion.

It moves with the abruptness of Morse code.

This diminutive shorebird, perched on the shoreline of Great Salt Lake, stands on the cusp of time. Behind it trails a path of ancestors stretching back into antiquity. This survivor from ancient times is now stepping into an uncertain future.

Long ago, the Aztec aptly captured this moving connectivity of time by painting trails of bare footprints across codices of paper produced from beaten tree bark portraying their history.

Let’s now stand beside that Snowy Plover, turn backward, peer into the past, and contemplate how long Snowy Plovers have nested and reared their young near the salty waters of Great Salt Lake. It is a misty view, for geologic time runs long and deep and human detection is but spotty and shallow.

The Era of the Snowy Plover

Snowy Plovers are associated with ocean beaches and inland saline lakes where their pale, cryptic coloration of gray and white blurs into salt-encrusted mudflats.

The prevailing narrative begins with Lake Bonneville, a freshwater pluvial lake that formed in response to changes in climate that saw an increase in precipitation and a decrease in evaporation as temperatures cooled. Water levels peaked about 18,000 years ago and covered much of northwestern Utah and extended into Idaho and Nevada. Water flowed out of the Bonneville basin down the Snake River drainage to the Pacific Ocean. Erosion at this outlet sent massive volumes of water down the Snake River Drainage, precipitously plunging the lake level by 300 feet. By about 13,000 years ago, Lake Bonneville had evaporated due to the warming climate and the lake level had dropped down to near the modern average level of Great Salt Lake.

When did Lake Bonneville’s unsuitable freshwater habitat end and saline Great Salt Lake begin, ushering in the era of the Snowy Plover?

The transition from Lake Bonneville to Great Salt Lake is arbitrary because they are manifestations of the same lake system. The shrinking lake became brackish about 13,000 years ago and hypersaline 11,500 years ago. During the last 10,000 years the water levels of Great Salt Lake have fluctuated, but with few exceptions have not risen more than about twenty feet above its average historic elevation.

According to conventional wisdom, Snowy Plovers have likely been racing about salt flats adjacent to Great Salt Lake for about 10,000 years.

Humans, like Snowy Plovers and all living organisms, have niches that provide basic elements required for existence. The intersection of the paths of humans and plovers likely occurred about 10,000 years ago when humans first moved into the valley of Great Salt Lake. Archeological evidence indicates early human-occupied caves on the western shoreline of Great Salt Lake where freshwater springs flowed onto the saline mudflats. Protein-rich seeds of iodine bush (Allenrolfea occidentalis), a salt-tolerant plant that grows only in salty soils, were harvested and provided major subsistence. Humans and plovers shared this habitat.

Highly adaptive humans spread out, finding suitable habitat away from the lake on river deltas with freshwater marshes and further east along creeks flowing from the Wasatch Mountains. The extensive wetlands and meandering drainages that made their way across the flat former lake bottom toward the now saline lake provided attractive resources for the human Paleo-Indian and early archaic hunter-gatherers whose rapidly expanding populations occupied a greater variety of ecological niches.

One never knows from year to year where the shoreline and productive habitat will be. Plovers have survived because when tomorrow comes and they return and find yesterday's sites under water or dried, they have wings to wander. Although the lake is dynamic, ever-shifting, and changing, Great Salt Lake was never fickle. Somewhere were areas where Snowy Plovers could find suitable habitat for nesting and foraging, and the species continued on for another generation. Before European settlers, the lake, like lungs, had unfettered space to expand and retract.

How important is Great Salt Lake to the survival of Snowy Plovers?

Snowy Plovers associate with ocean coasts and inland saline lakes, their range a complicated scattered mishmash of areas mostly in North America, with a few resident birds occurring along the western coast of South America.

Why commonly rather than definitively?

Taxonomists are constantly disagreeing, lumping and splitting species and subspecies. Not so long ago Snowy Plover and Kentish Plover of the Eastern Hemisphere were recognized as a single worldwide species. Then science chopped off the Kentish Plover, declaring it a separate species.

The number of subspecies today is debated. From the Birds of the World species account of Snowy Plover of the Western Hemisphere published in 2020:

Systematics History
This article requires further editing work to merge existing content into the appropriate Subspecies sections. Please bear with us while this update takes place.

Great Salt Lake Snowy Plovers belong to the subspecies Charadrius nivosus nivosus, often referred to as the Western Snowy Plover. It is by far the most numerous and widespread subspecies. Two major populations exist: resident birds that nest along the Pacific listed as threatened in 1993 by the U.S. Fish and Wildlife Service and a migratory population that breeds mostly in the dry western interior of the United States and Mexico.

A breeding survey of Snowy Plovers in the continental United States and Mexico, conducted in 2007 and 2008 (which excluded the Pacific population and a small Caribbean population) pegged the population of Snowy Plovers at 23,555. Great Salt Lake accounted for 5,541 individuals, or 23 percent of that population. The only other area with a large concentration was Salt Plains National Wildlife Refuge in Oklahoma with 5,280 individuals, or 22 percent of the population. The remainder were scattered sporadically and in low numbers across their extensive range.

Wisdom can be mined from the ages.

What does your mind seek?
Where is your heart?
If you give your heart to each and every thing,
It leads it nowhere. It destroys your heart.

We cannot dole plover habitat out piece by piece, give everyone and everything a piece of the action, and expect to retain the integrity vital for plovers.

Each generation receives the Earth from its predecessors, makes its mark upon it, and then passes it on to the next generation. A forward-moving path of time. We cannot change our starting point, for that is set by the actions of others before we began, nor can we dictate where those of the future will head, but for a while the footsteps are ours. We can follow the easy course, for most humans pick up without questioning the cadence and direction of the path onto which they were born.

But we are not on a good path. We need to have the courage and vision to change direction away from the destructive path we are on, toward a trail of good stewardship, protection, and preservation. We need to make our decisions with enlightenment, based on knowledge, and with an eye to the responsibility humans have to other life forms.

Humans have enormous power not only to alter and destroy, but to preserve and protect.

Snowy Plovers have likely survived at the spot we call Great Salt Lake for millions of years, but can they survive their recent encounter with us?

Let us rise to our time of stewardship with valor and honor and with a firm commitment to make our actions consistent with survival, not extinction, and join that Snowy Plover standing on the shoreline of Great Salt Lake as it steps into the future.

The Snowy Plover is as exquisitely drab and colorless as the mudflats on which it dwells.

All life is a wonder and marvel of intrinsic worth.

There is beauty in existence. 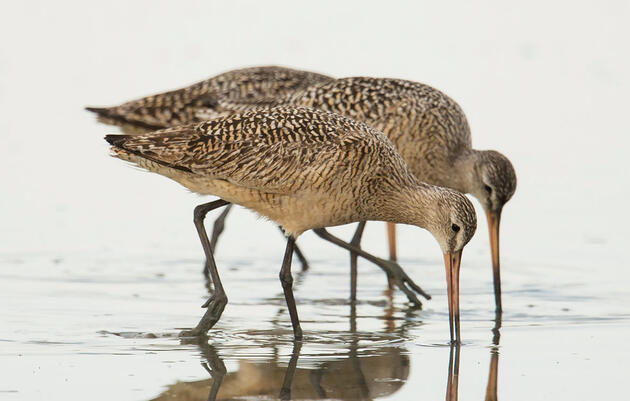