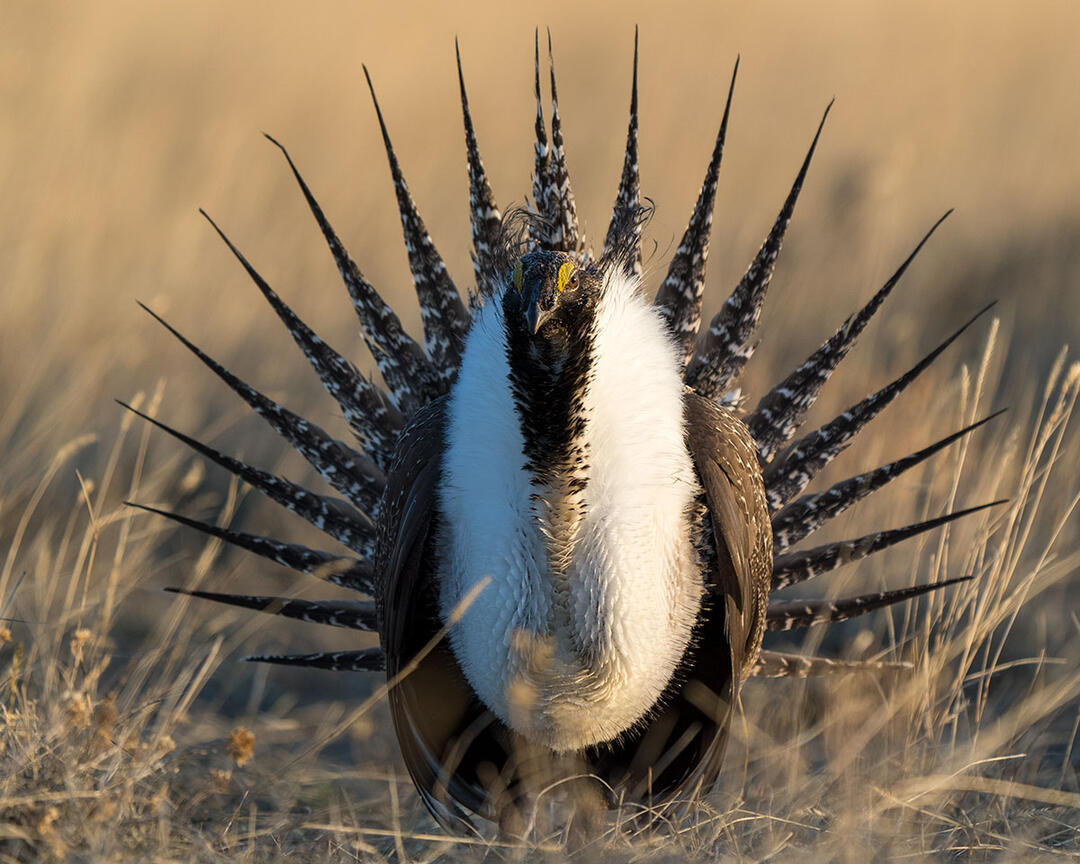 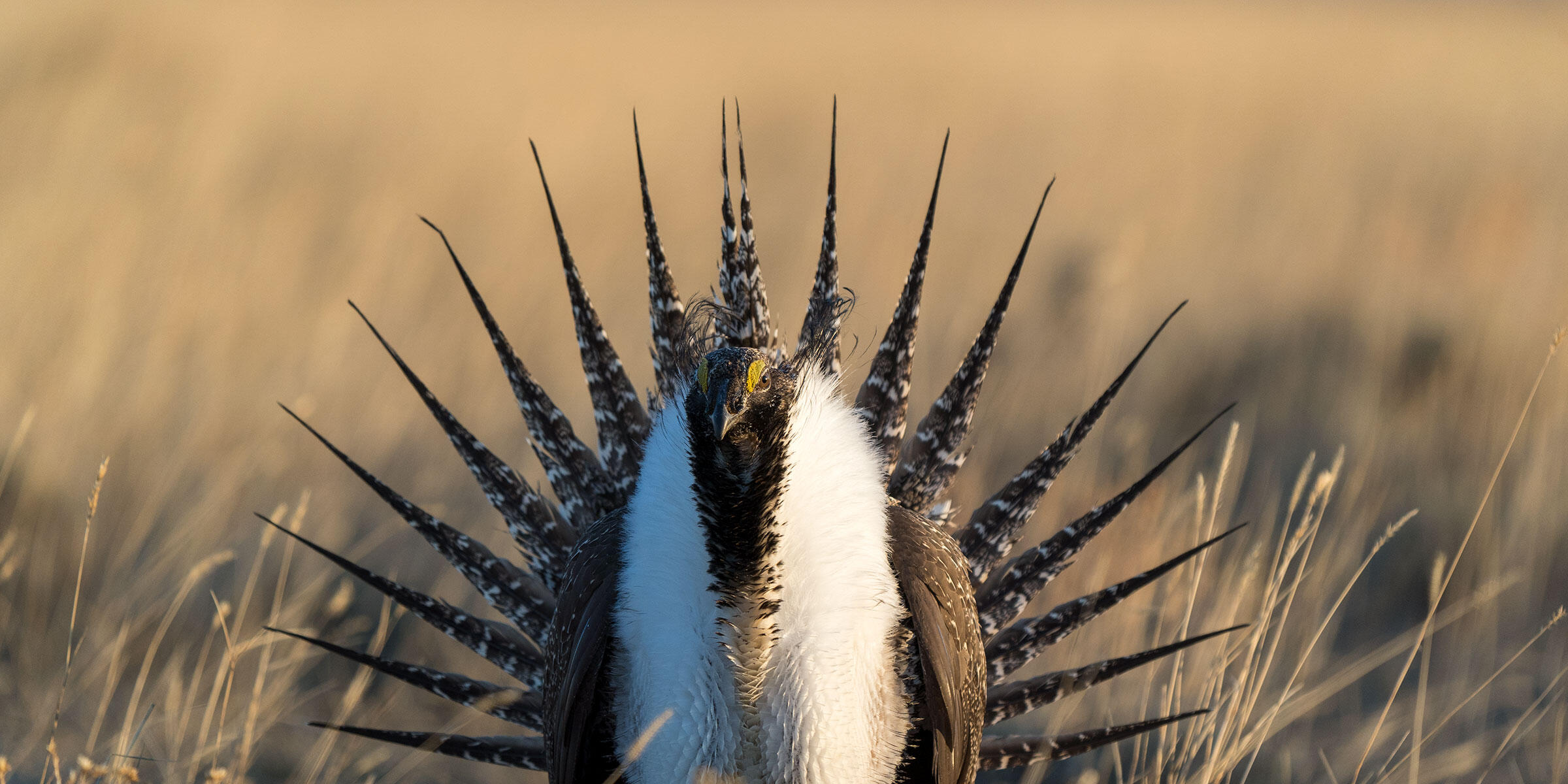 Tremendous challenges and victories for Greater Sage-Grouse and its habitat

More than 350 species depend on the sagebrush steppe ecosystem, as well as people. Reaching 13 states, the ecosystem is vast and provides vital bird habitat, but only half of it is left and new threats continue to emerge. Since 2006, Audubon’s Sagebrush Ecosystem Initiative has brought together individuals, industry, agencies, and NGOs to promote science-based solutions that balance the needs of people and birds. We raise the profile of this overlooked ecosystem, inform the public of the threats it faces, and empower advocacy on its behalf. Our goal is to ensure a healthy future for the sagebrush ecosystem and its iconic Greater Sage-Grouse.

“The pressures on the sagebrush ecosystem have never been greater,” said Daly Edmunds, director of policy and outreach for Audubon Rockies. “Throughout the year, the administration expedited oil and gas leasing on public lands in sagebrush steppe habitat while discarding key regulations.” Bureau of Land Management (BLM) state offices pushed forward quarterly lease sales despite rock-bottom oil prices and protests filed by Audubon and other organizations. “It’s been very troubling how they willfully disregarded science and their legal obligation to steer development away from sage-grouse’s most important habitats,” said Edmunds.

As part of its energy dominance agenda, the federal administration made numerous politically motivated attacks on sage-grouse conservation plans. Among them were changes to BLM management plans that hindered public engagement on policy decisions, disregarded scientific evidence of growing threats to sage-grouse, and dismantled collaborative conservation efforts.

In the face of drastic changes to long-standing conservation agreements and management policies, Audubon fought hard to defend the future of sagebrush country over the past year in tandem with a broad network of conservation partners. We elevated these complex issues through news outlets and our own communication platforms (see our new cheatgrass video). We inspired an unprecedented 103,000 Audubon members to call upon the BLM to not weaken sage-grouse protections. We rallied more than 1,000 public comments and prepared expert witnesses to testify in support of science-based sage-grouse protections to the Colorado Oil and Gas Conservation Commission’s pivotal rulemaking process. As a member of the Wyoming Sage-Grouse Implementation Team, Audubon advocated on behalf of the bird and testified in support of strong, state-led mitigation protections. Perhaps most importantly, we won a lawsuit that challenged the federal administration’s energy dominance agenda.

On May 22, the U.S. District Court in Montana struck down the basis for the Trump administration’s massive oil and gas leasing plans on more than a million acres of public lands in habitat for sage-grouse. The implications are enormous.

The BLM adopted a policy directive in 2017 that has allowed millions of acres of oil and gas leasing in sensitive sage-grouse habitat. The court invalidated that directive and nullified 440 oil and gas leases, covering about 336,000 acres in Wyoming and Montana, that the BLM sold as part of its energy-centric approach to public land management.

This decision came in a lawsuit filed by Earthjustice on behalf of the National Audubon Society, Montana Audubon, Montana Wildlife Federation, The Wilderness Society, and National Wildlife Federation. In it, the judge ruled that the BLM’s directive was inconsistent with the requirement of the 2015 sage-grouse plans to prioritize leasing and development outside sage-grouse habitat.

“We are fighting for our public lands and for a landscape that is extremely hard to recover from this type of disturbance,” said Alison Holloran, executive director of Audubon Rockies. “The court decision brings hope not only to sage-grouse, but to more than 350 species of wildlife that live in the sagebrush steppe, including other species of conservation concern.” In addition to the leases set aside by the court, the decision impacts millions of acres of sage-grouse habitat where the BLM has sold or proposed leases as part of implementing the 2017 directive. By upholding the 2015 sage-grouse agreements, the lawsuit reaffirms the requirement to manage public lands for multiple uses, including wildlife.

2020 by the Numbers: Sagebrush Ecosystem Initiative

Working With Ranchers to Restore Rangelands

Learn about our new tool for improving bird habitat on millions of acres.